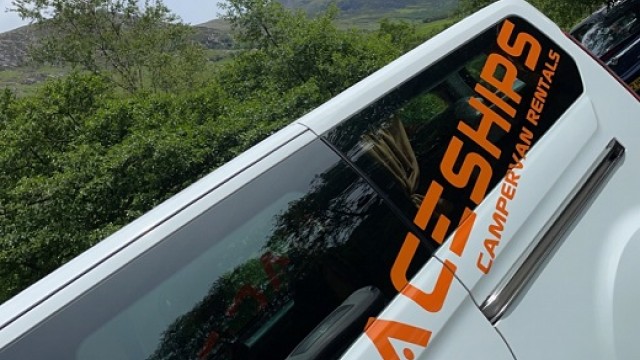 Fly around the Three Peaks challenge in a Spaceship!

Fly around the Three Peaks cha…

If you are looking for a great adventure or fund-raising opportunity, then fly around the Three Peaks challenge in a Spaceship!

That’s exactly what Gary Dunn done! Gary contacted us saying that he was raising money for Marie Curie, who had provided support for his Grandad who had sadly died of cancer. Gary and his mate Cameron Mills wanted to hire a campervan to climb the highest peaks in Scotland, England and Wales – in 24 hours.

That’s the Three Peaks challenge. The challenge is to climb Ben Nevis in Scotland, then travel to Scafell Pike in England’s Lake District before heading down to tackle Yr Wyddfa (Snowdon) in Wales.

We recommended our custom-designed and converted Spaceships Voyager campervan. Campervan hire is perfect for the Three Peaks Challenge, and the Voyager sleeps up to 4 people with all cooking kit, 2 gas stoves, a 15 litre water tank and fridge/freezer. There is also a mains-hook up and awning to extend the living area – if you get time to stay at a campsite – which Gary and his team did at the end of the challenge.

It’s economical, easy to drive and park and well suited to the narrow twisting roads around the hills. Gary also pulled in his Dad, Darren, as the team’s designated driver. This is important, as it allows time for the climbers to rest and recuperate on the road before tackling the next peak. 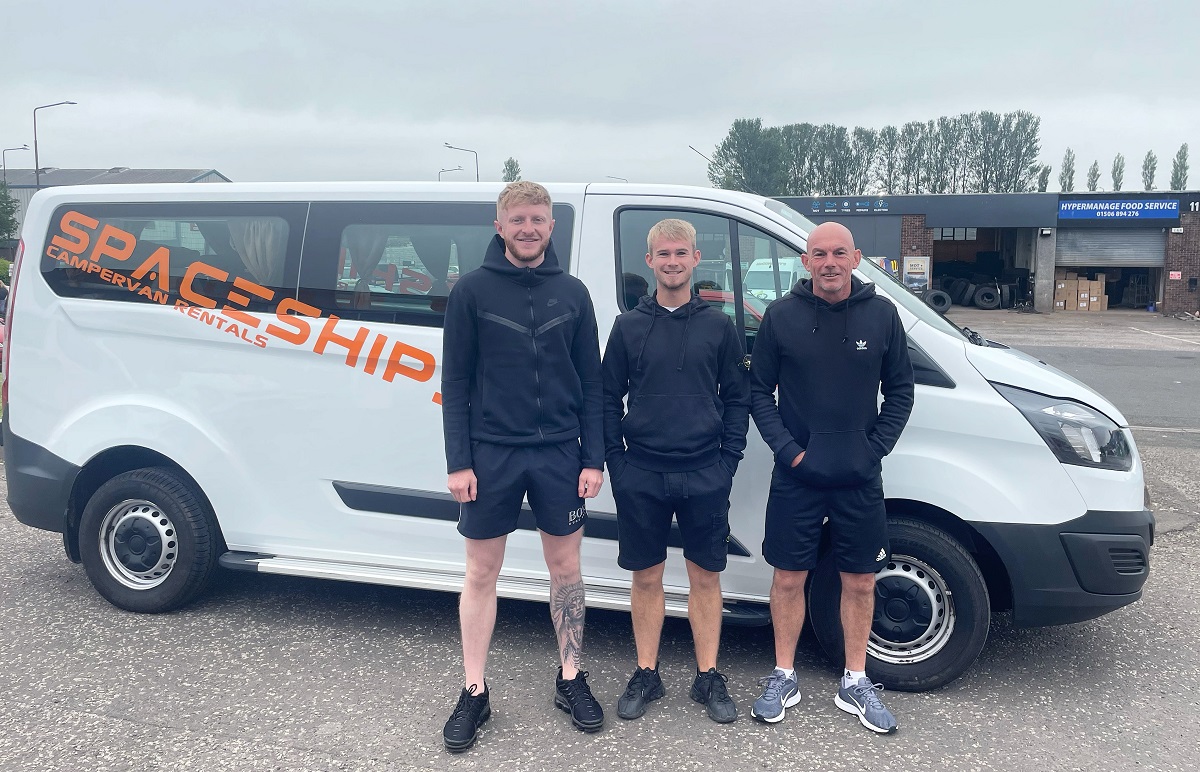 Gary, Cammy & Darren ready to fly around the Three Peaks in a Spaceship!

Gary and the team collected their Spaceships Voyager campervan from our Edinburgh branch. After a quick Breakfast Butty, kindly provided by Laura from her mobile snack van near Spaceships Edinburgh, they headed north-west to Fort William and the start of their challenge.

The Voyager touched down in the Grampians and the team started the clock at 4.15 in the afternoon and began the climb up Ben Nevis, the highest mountain in the UK at 1345 metres. They made the summit and were back down at base camp and their Spaceship by 8.33pm. 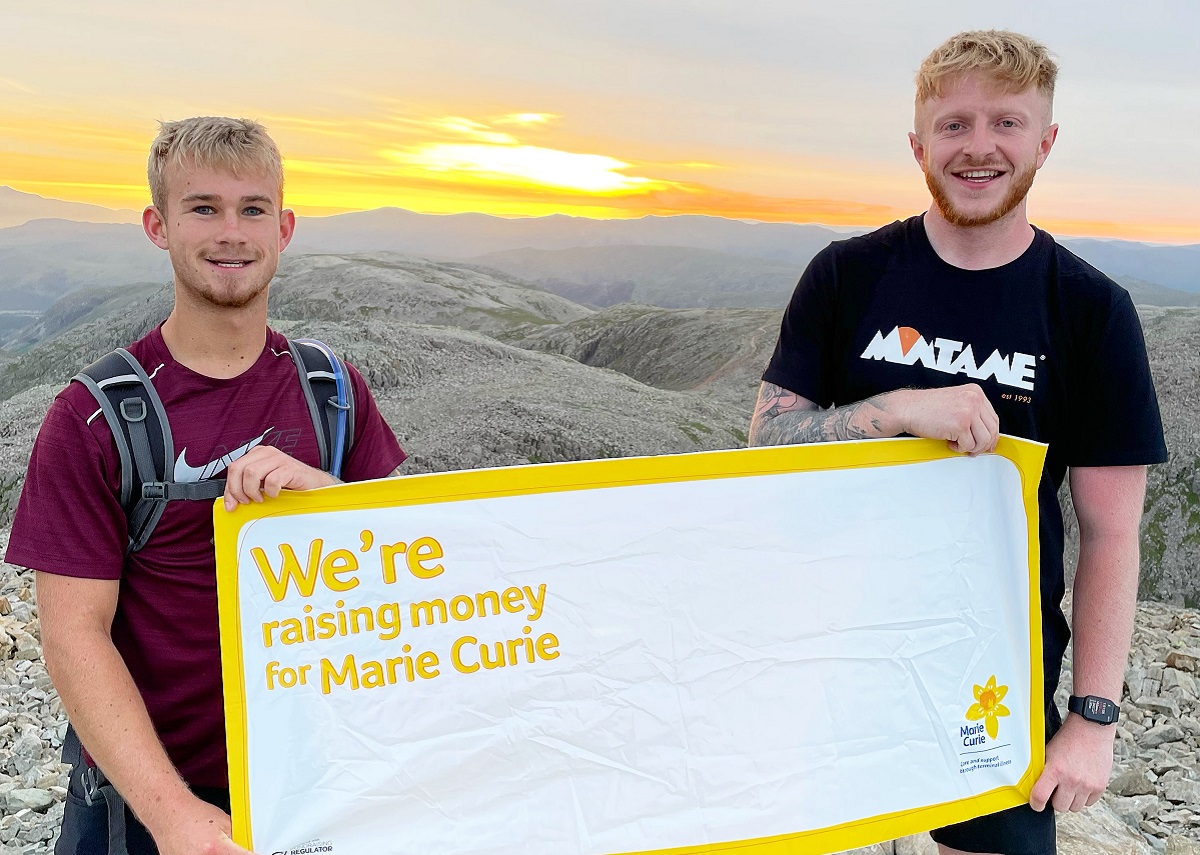 On the summit at sunset. Cammy and Gary at the top of Ben Nevis

Driver Darren fired up the Spaceships Voyager campervan and they began the 260 mile drive south, crossing the border into Cumbria and the Lake District.

At 3.19am, practically in the middle of the night, Gary and Cammy began the ascent of the 978 metre Scafell Pike, the highest mountain in England, but the lowest in the Three Peaks Challenge. They were back down by 6.38am and took-off in their Spaceship for the last leg of the journey – 209 miles to Snowdonia in Wales. 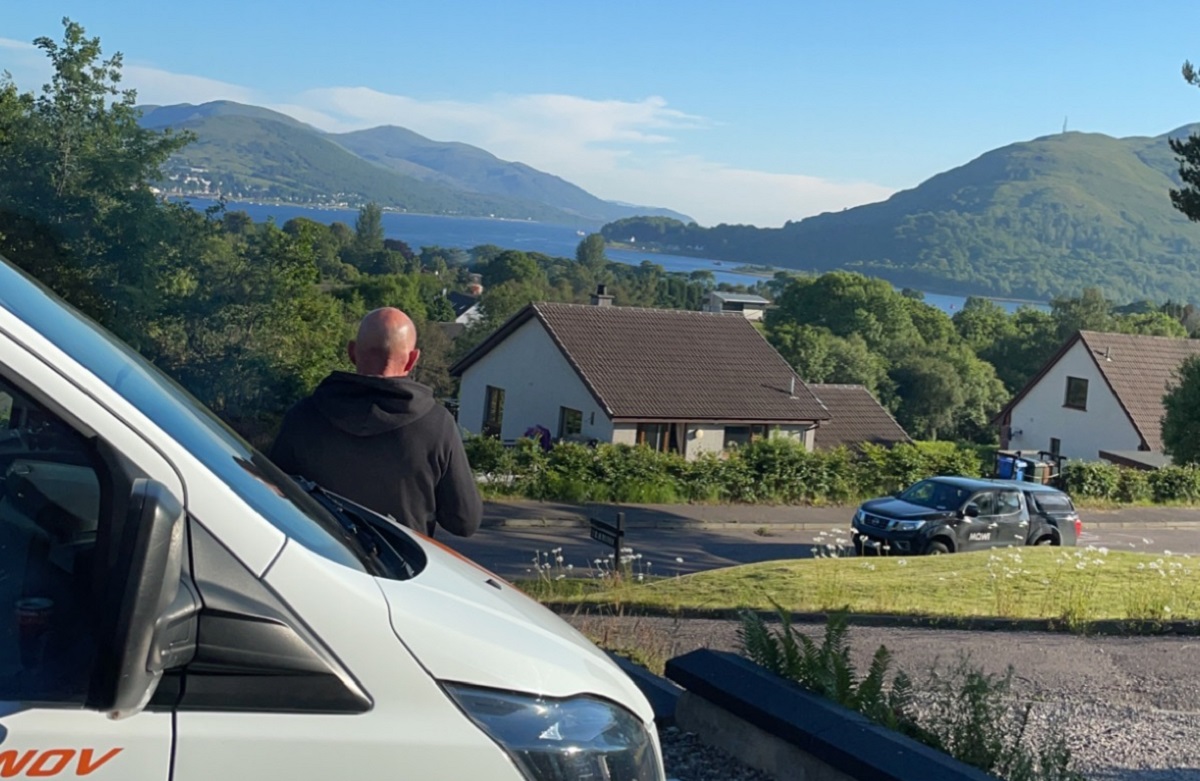 Base camp. Driver Darren ready for take-off from Scafell Pike in The Lake District

On top of the world – in a Spaceship

They landed at Yr Wyddfa (pronounced Ear Withva, but better known as Snowdon) at 12.15 – but no time for a lunch stop! With just 4 hours to get up the 1085 metres to the top of the mountain and back down again, the race was on. “The pressure was on at that point,” said Gary, “because not only have you got the challenge of your third climb in the last 20 hours, but you are doing it against the clock.”

Gary and Cammy dug deep and absolutely smashed it, making the summit and back with 32 minutes to spare. They completed their Three Peaks Challenge in a total of 23 hours and 28 minutes. 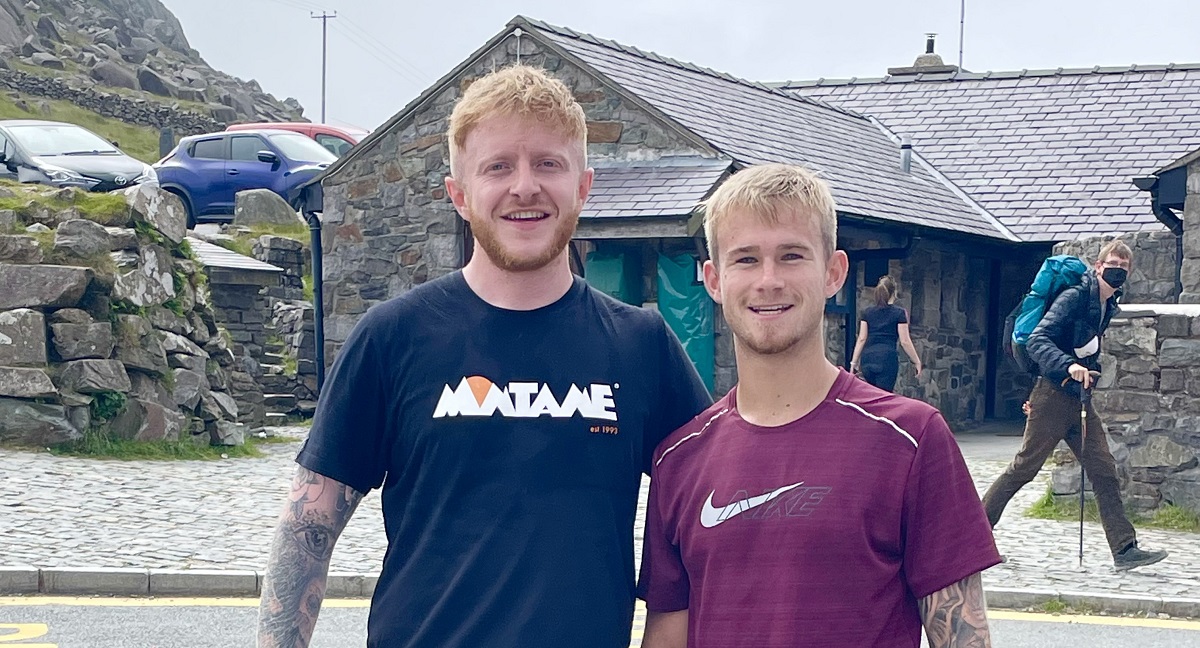 They did it! Gary & Cammy back at the Snowdon base camp - with 32 minutes to spare!

Not only did they conquer the Three Peaks Challenge, they also smashed their original fund raising target of £500, donating an incredible £3,300 to Marie Curie.

Gary was delighted to have achieved both goals. “It’s a brilliant feeling to have climbed the Three Peaks in under 24 hours and it’s also a fitting tribute to my Grandad to have raised over £3,000 for such a fantastic charity,” he said, adding, “The Spaceships Voyager was perfect for the challenge and an important part of our team.”

Prepare for take-off in your Spaceship

Massive congratulations to Gary, Cammy and Darren and we’re sure your Grandad would have been really proud of you. If you have enjoyed their story, you can donate on Gary’s fund raising page here.

And if you are planning your own walking, hiking or climbing trip, or are thinking of taking on the Three Peaks Challenge yourself, book your campervan hire with us and prepare to take-off on your adventure in a Spaceship!